A few weeks ago I finally got around installing the J1772 module and last night I finally went out to test it! 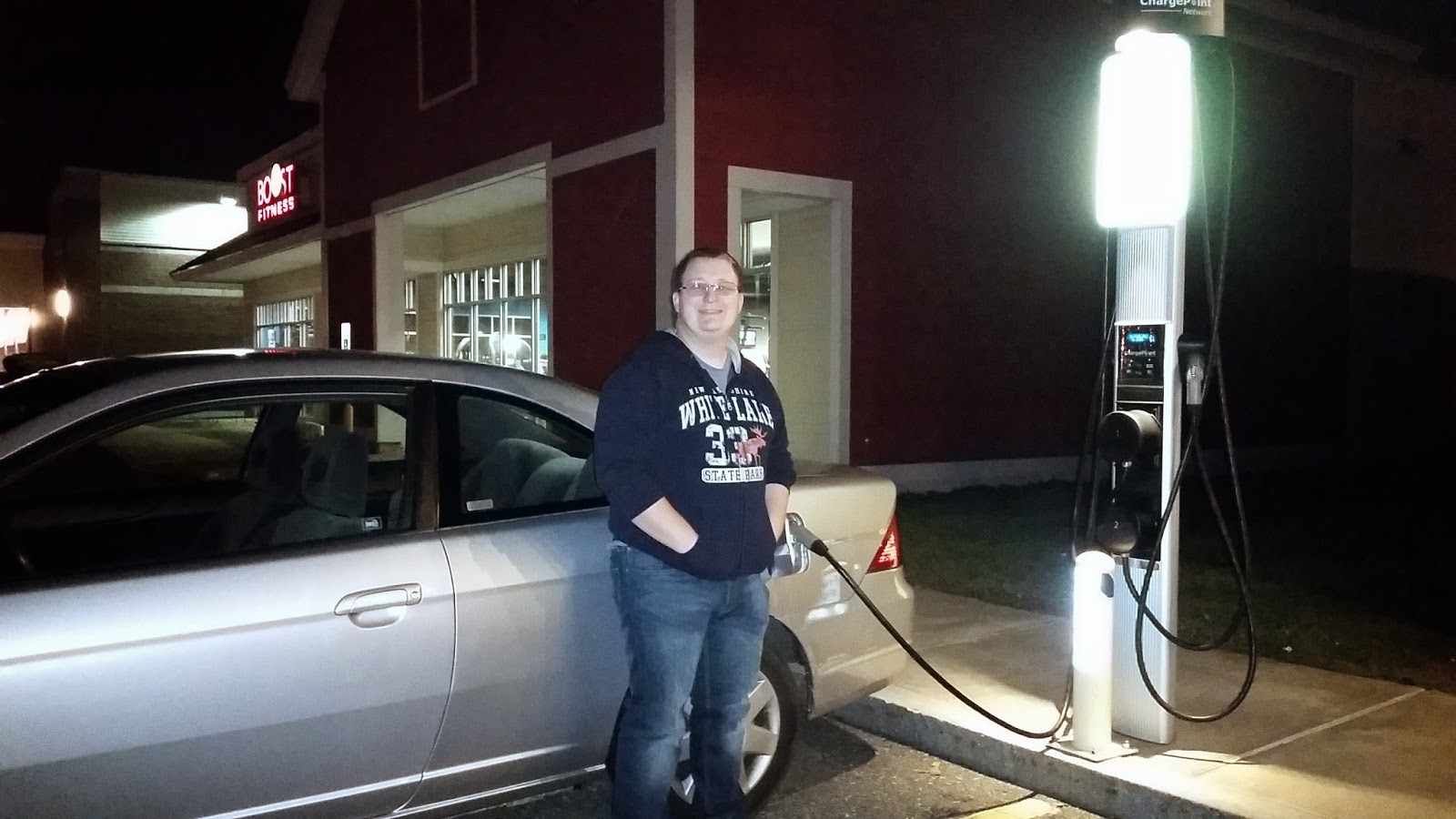 And it works great!

I went to the local Chilli's in Westford, MA for dinner and they have a two port Charge Point setup. It worked perfectly and I could monitor the charge from my phone!

There are a lot of ChargePoint units around and I'm going to start using them more often on my travels.

I'm still waiting for my work to install their station, they mounted the cement stands last week and its been raining like crazy since. I'm hoping they don't charge for the stations since every other station in the state is free.
Posted by David Harrington at 9:52 AM 1 comment:

I've been using the EV to commute to work quite often and I recently started to log my drives to work to see how much power I was using. Well after going through those logs, I found that during the highway stretch the Zilla was getting up to 85C, and my available power would go down, meaning my ability to pass someone was minimal.

With that, I decided it was time to install a liquid cooling system. I got a transmission cooler from AutoZone and a 12v quiet pump from Amazon and tubing from my local ACE Hardware. It took about 4 hours to install, then I spent two days tweaking it and bleeding the air from the system. 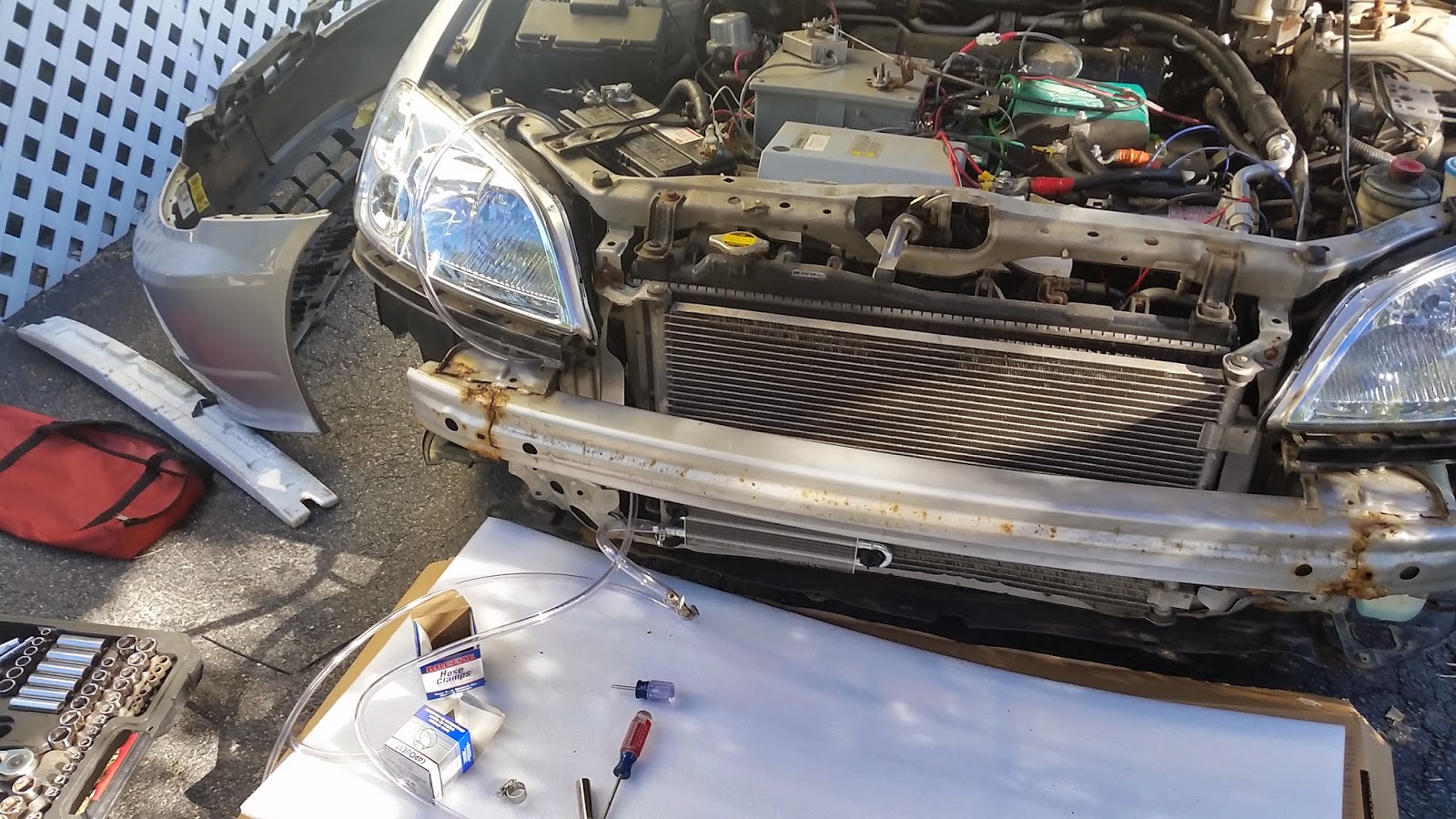 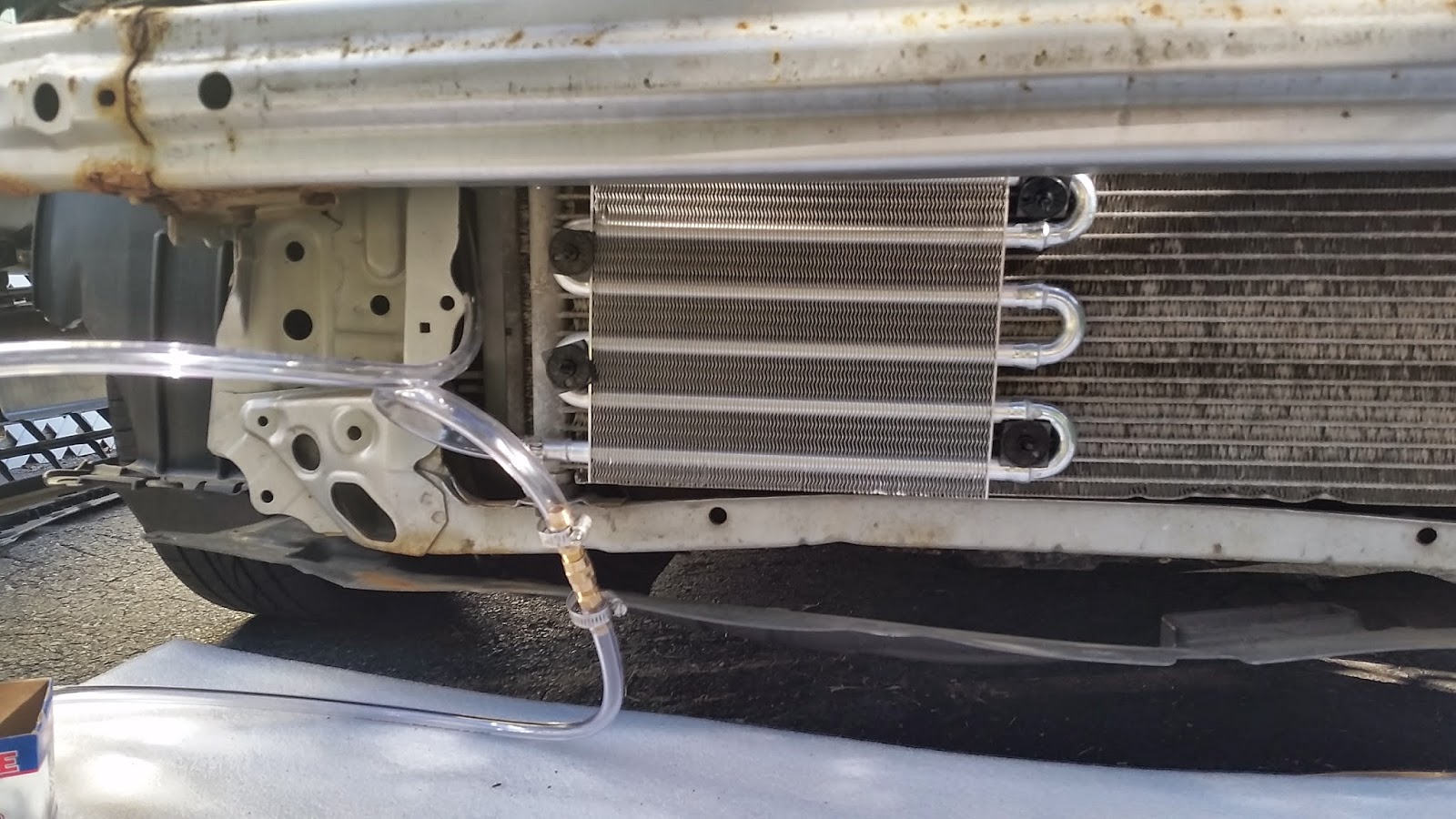 There was a massive improvement with the water cooling system installed! During my commute I saw only a high of 35C during the highway stretch and I could easily pass people on the highway. It's nice that I now have performance equal to the original Civic engine and its real fun to drive.

Next on my list is a fix a water leak on the driver's side and install the J1772 circuitry. I also want to get a MIG welder and build a new battery box that will include insulation, a stronger/nicer cage and the ability to remove the box from the car trunk with an engine crane. It's going to take a while to design, but it's probably going to be my winter project.
Posted by David Harrington at 5:22 AM No comments:

Since I purchased the Civic a few years ago, one of the things that I didn't like was the headliner. It had some cigarette burns and the fabric was peeling off. And in early September it was peeling to bad that it was a distraction while driving so we finally decided to replace the fabric.

The first thing we had to do was take the headliner out and strip off the old fabric and foam. 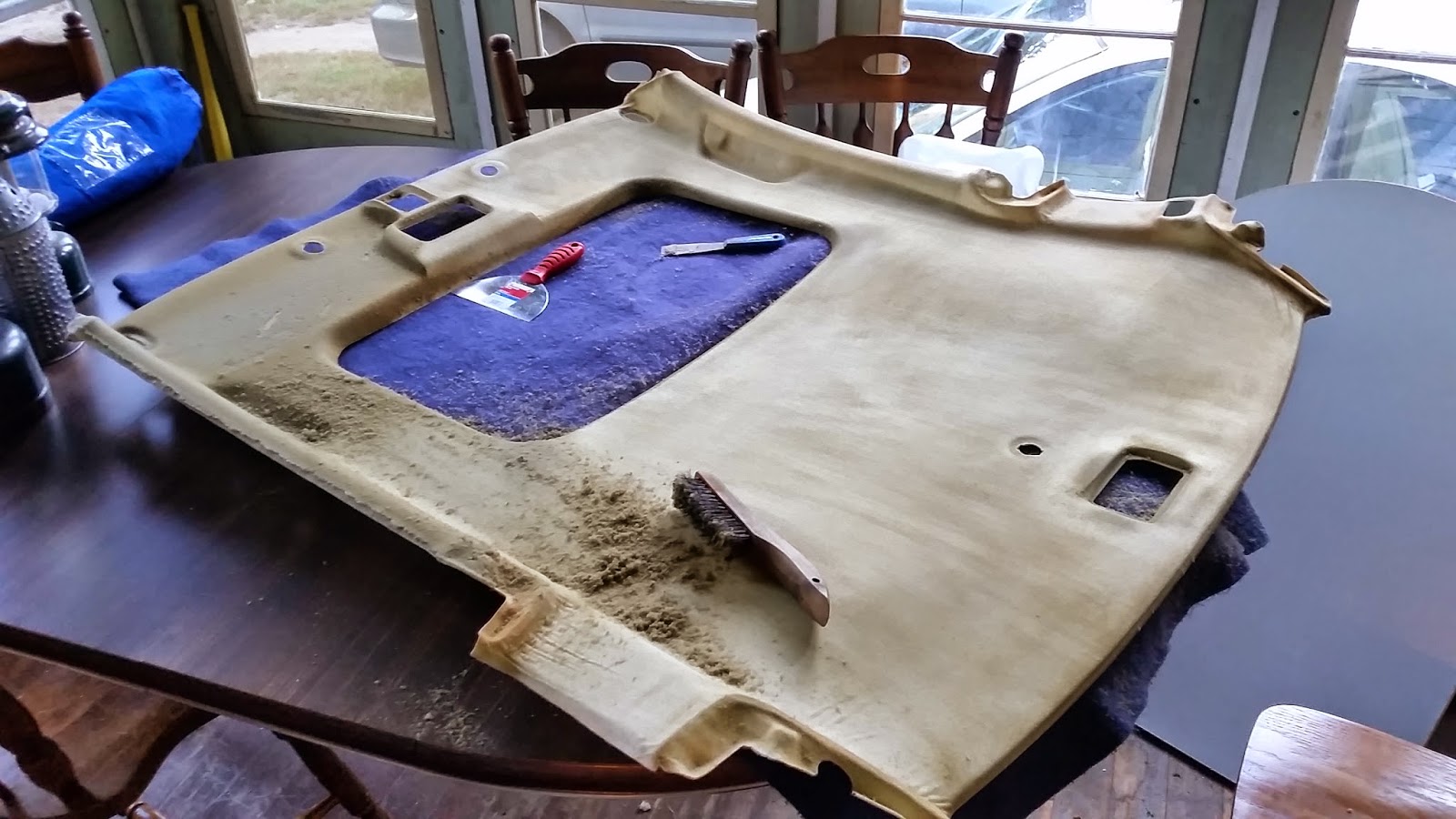 It took about 4 hours to remove all the old glued foam using a wire brush. One of the previous owners must have been a serious smoke due to the tar we found, but the Civic itself didn't smell like smoke. I also found a ton of those Christmas tree air fresheners which is probably why.

Next we laid out and glued down the new headliner fabric we got from Joann Fabrics. 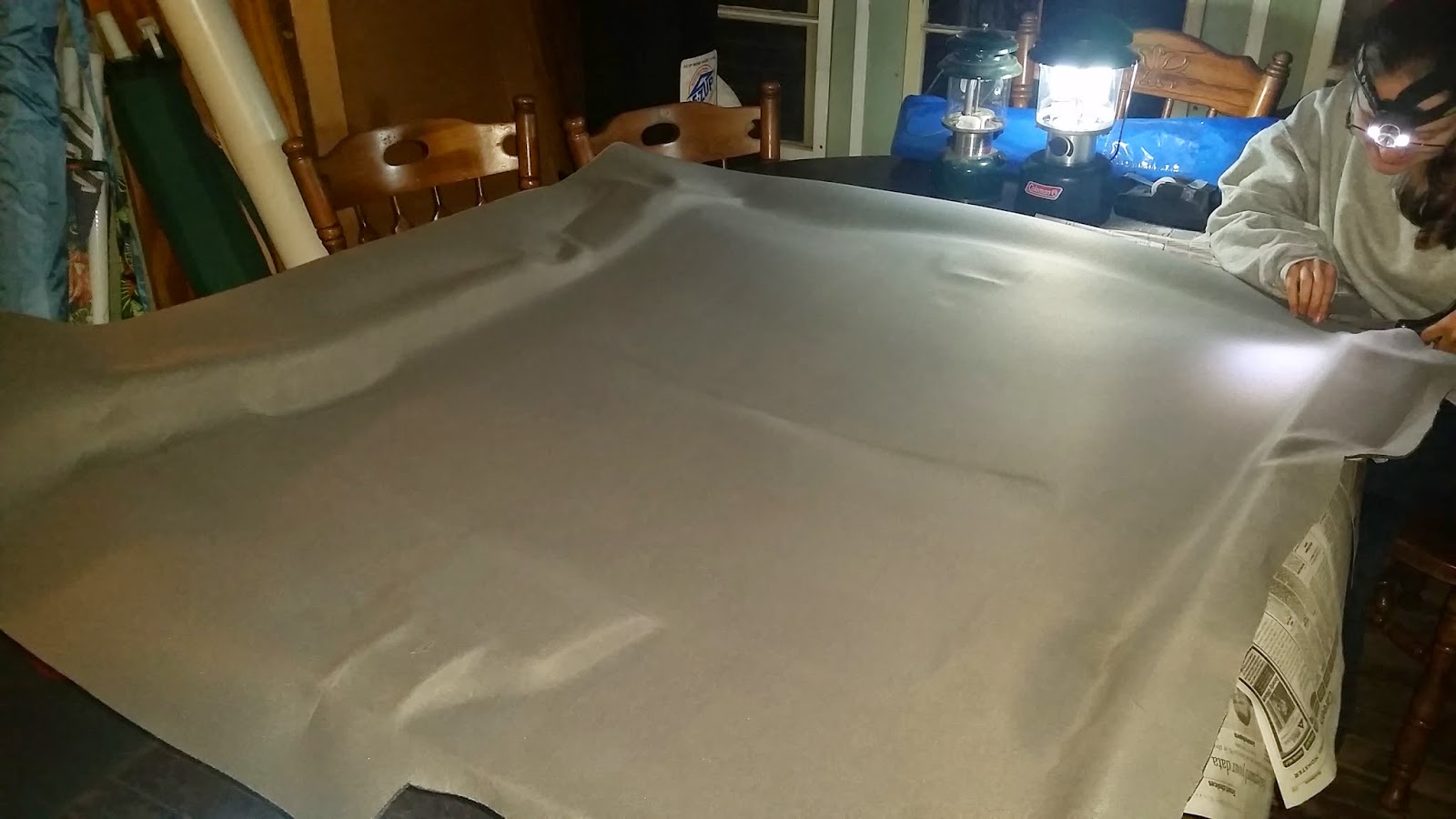 It took a while to smooth it out and get the fabric to go nicely into all the little nooks and edges of the headliner board. Once it was down we let it dry for 24 hours and then cut the holes out for the lights and sun roof. 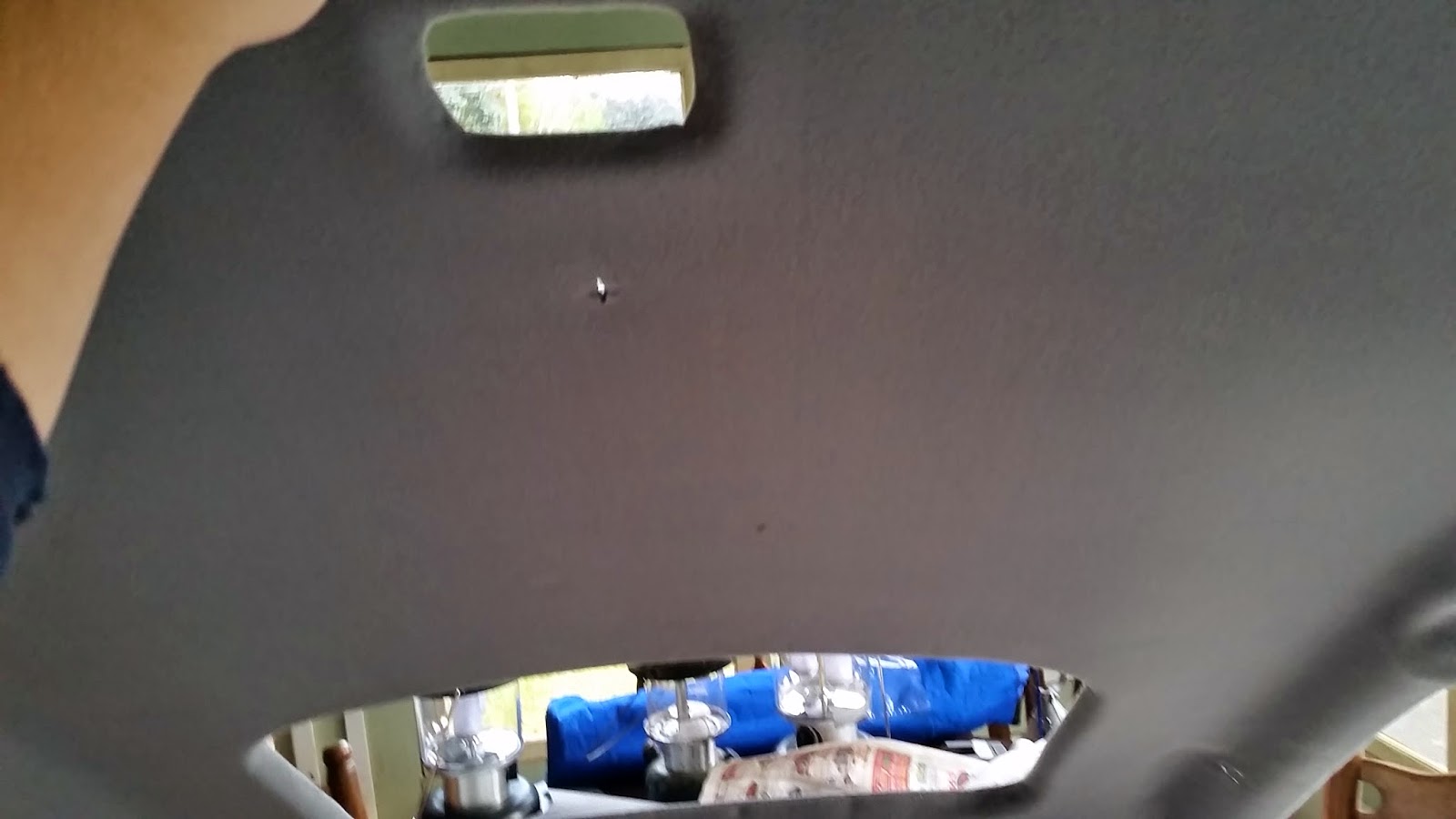 Once that was done, installing it was easy and now the EV looks much better, and has a bit of a new car smell!
Posted by David Harrington at 5:12 AM No comments:

Today is my one year anniversary at my job and I decided it was finally time to take my EV to work!

I've been hesitating for a year because of my 30 mile commute, mostly hilly highway.  Well the Civic drove great and I should have done this from the start! I used 60.1 AH and it's now charging

My motivation has returned on this project! Now I want to finish the J1772 installation and get air conditioning installed! 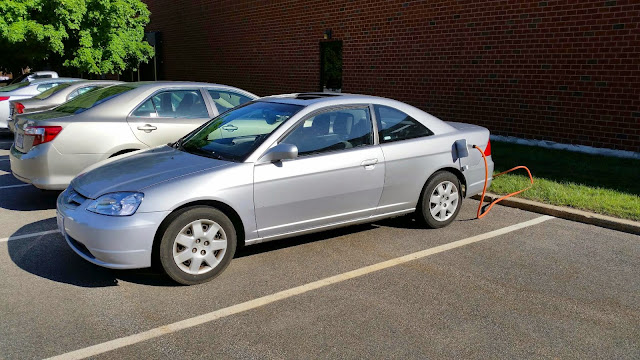 This past weekend was once again full of nice warm weather. With that, I was able to finally install my J1772 socket onto my EV. 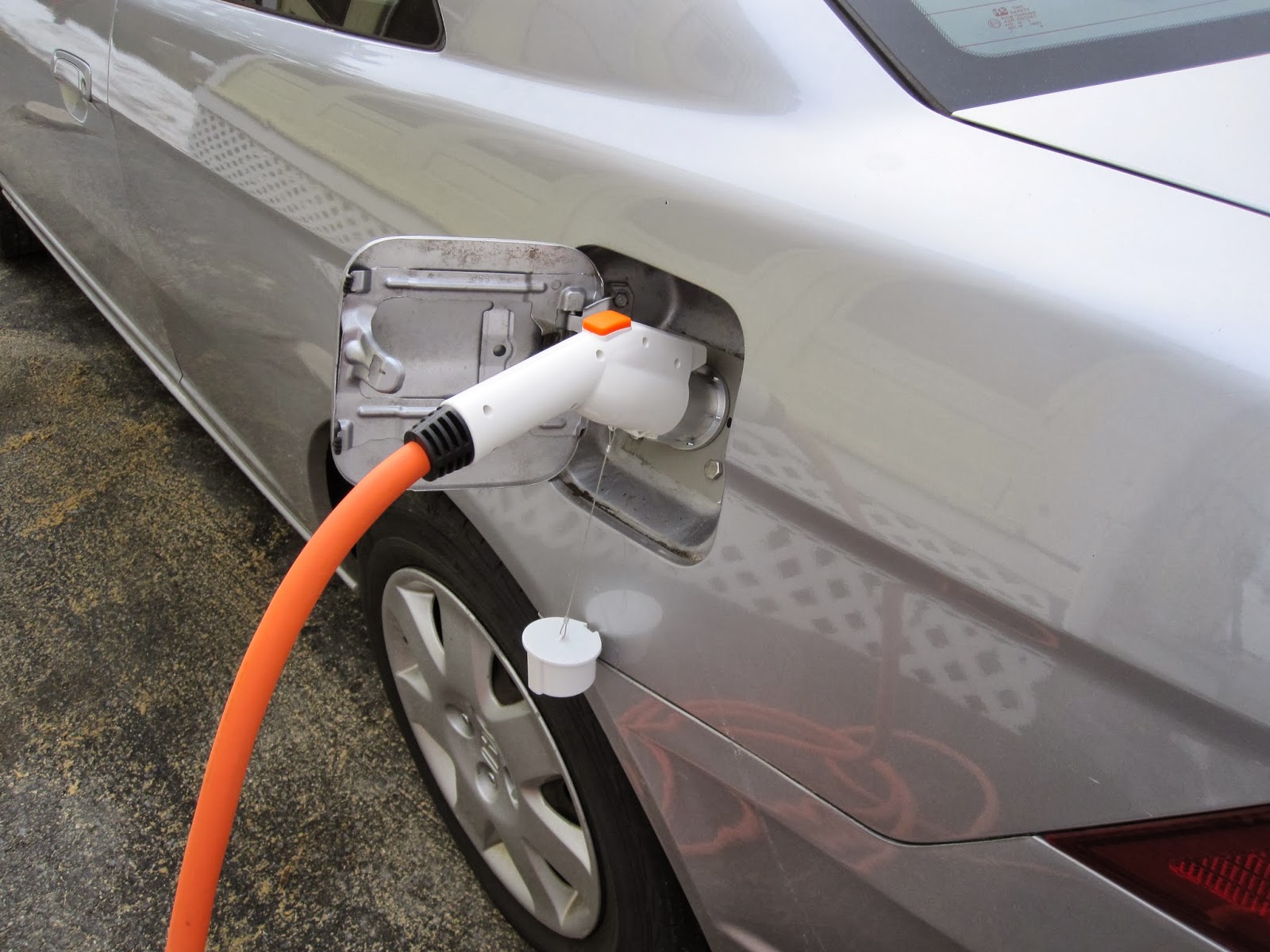 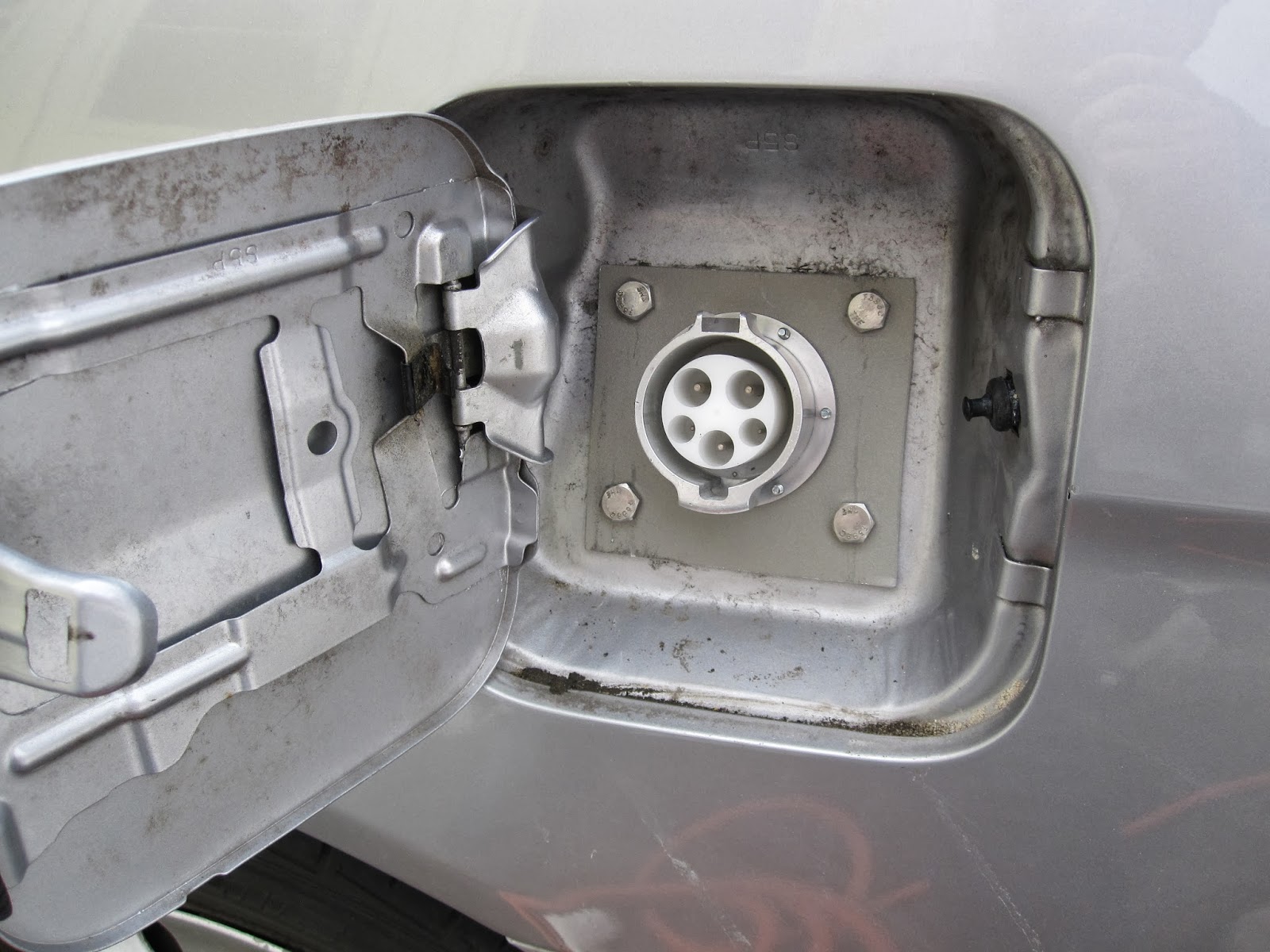 I have not installed the AVC2 control circuit for the J1772 yet, but that is coming. So until then I can't use the charging stations, but I can still run off of 120v/240v circuits with my extension cords.

This week I am going to be testing different routes to work to try and find the best one to take with my EV. I'm also going to do some highway runs this week to figure out what kind of wh/mi it takes to cruise at 60+ MPH.
Posted by David Harrington at 10:29 AM No comments:

It's been a while since I've had time to work on my EV, but the weather was good enough today to motivate me.

Today I finally mounted the EV Display to a Pillar Pod: 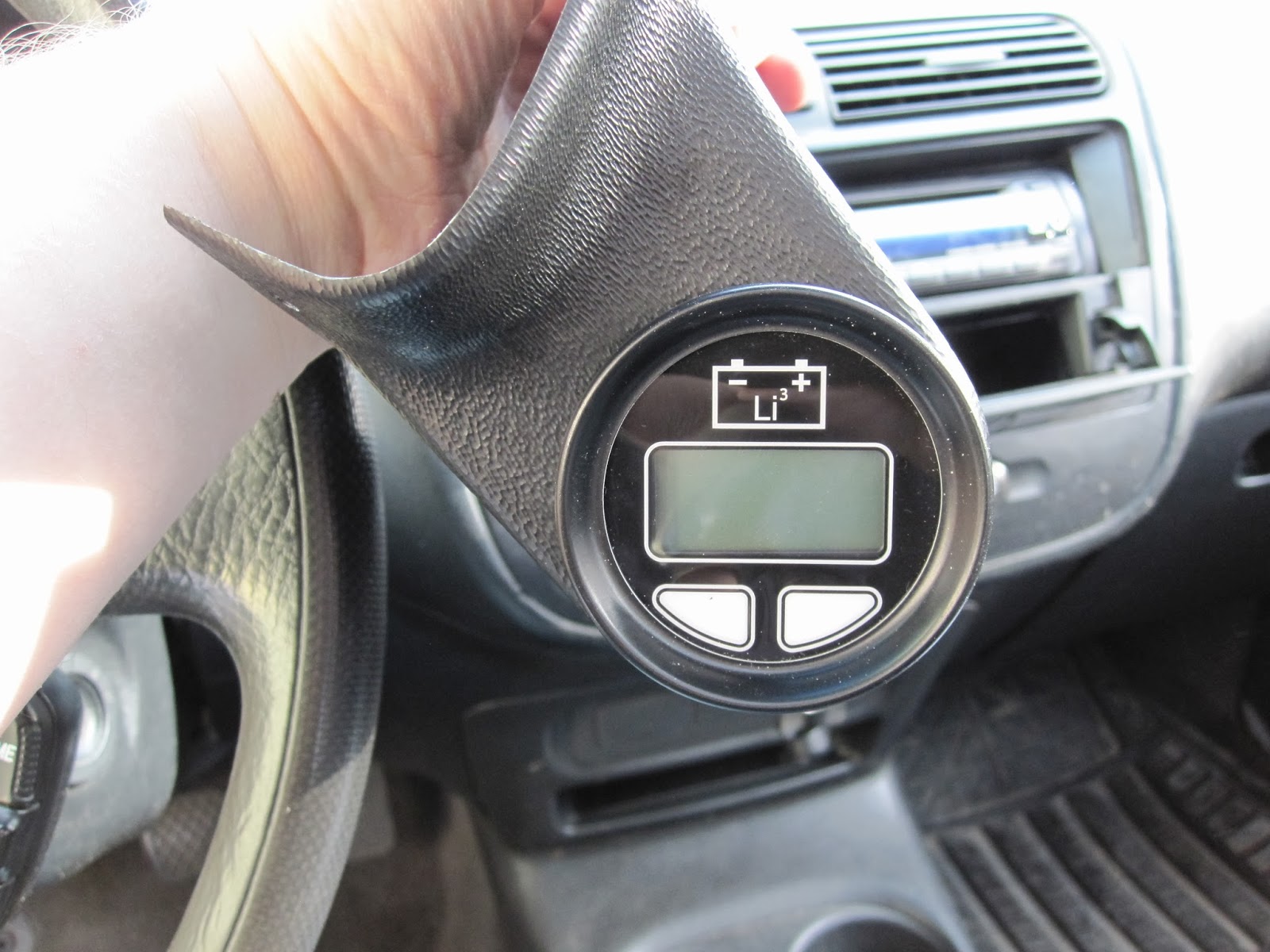 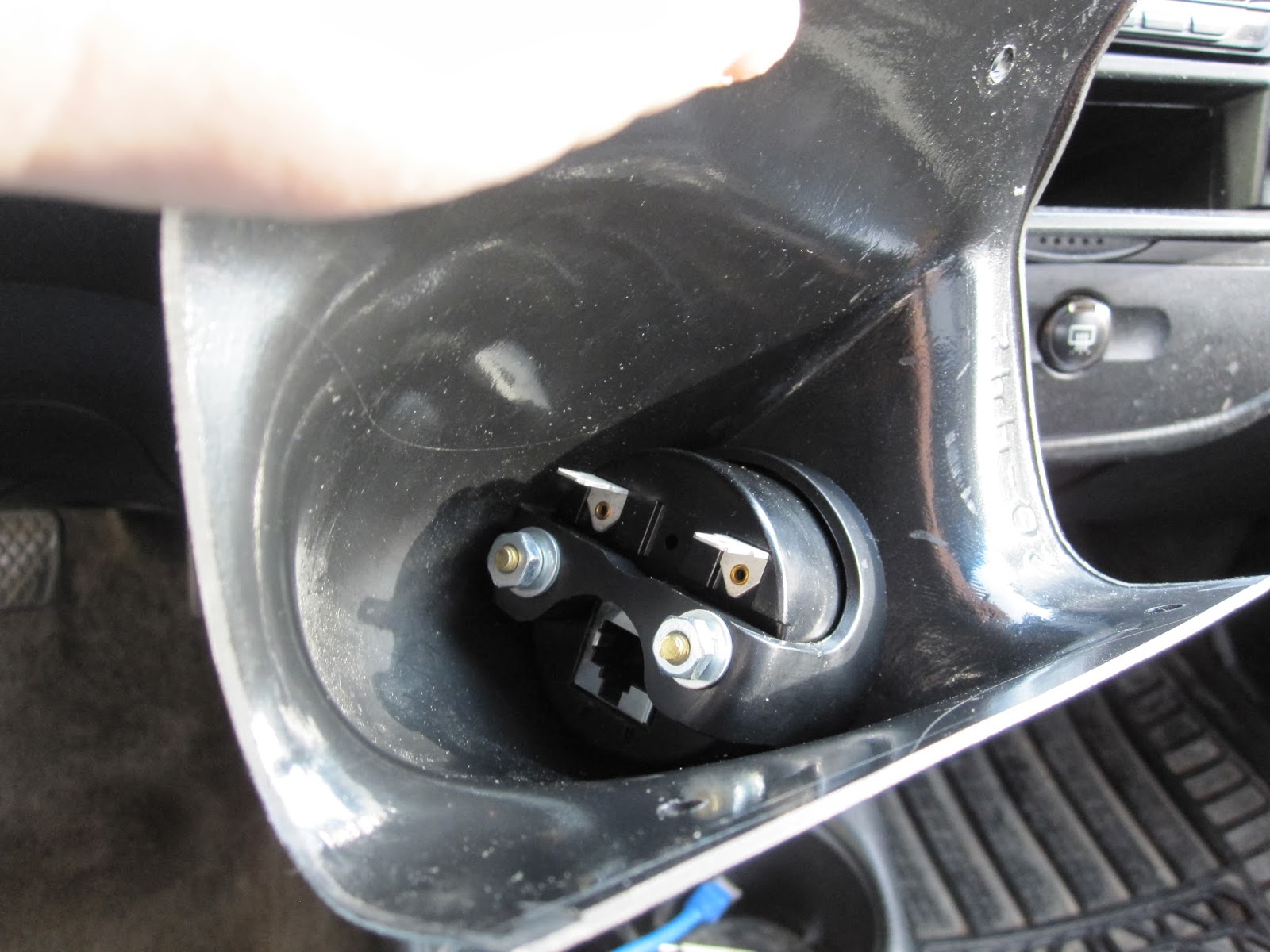 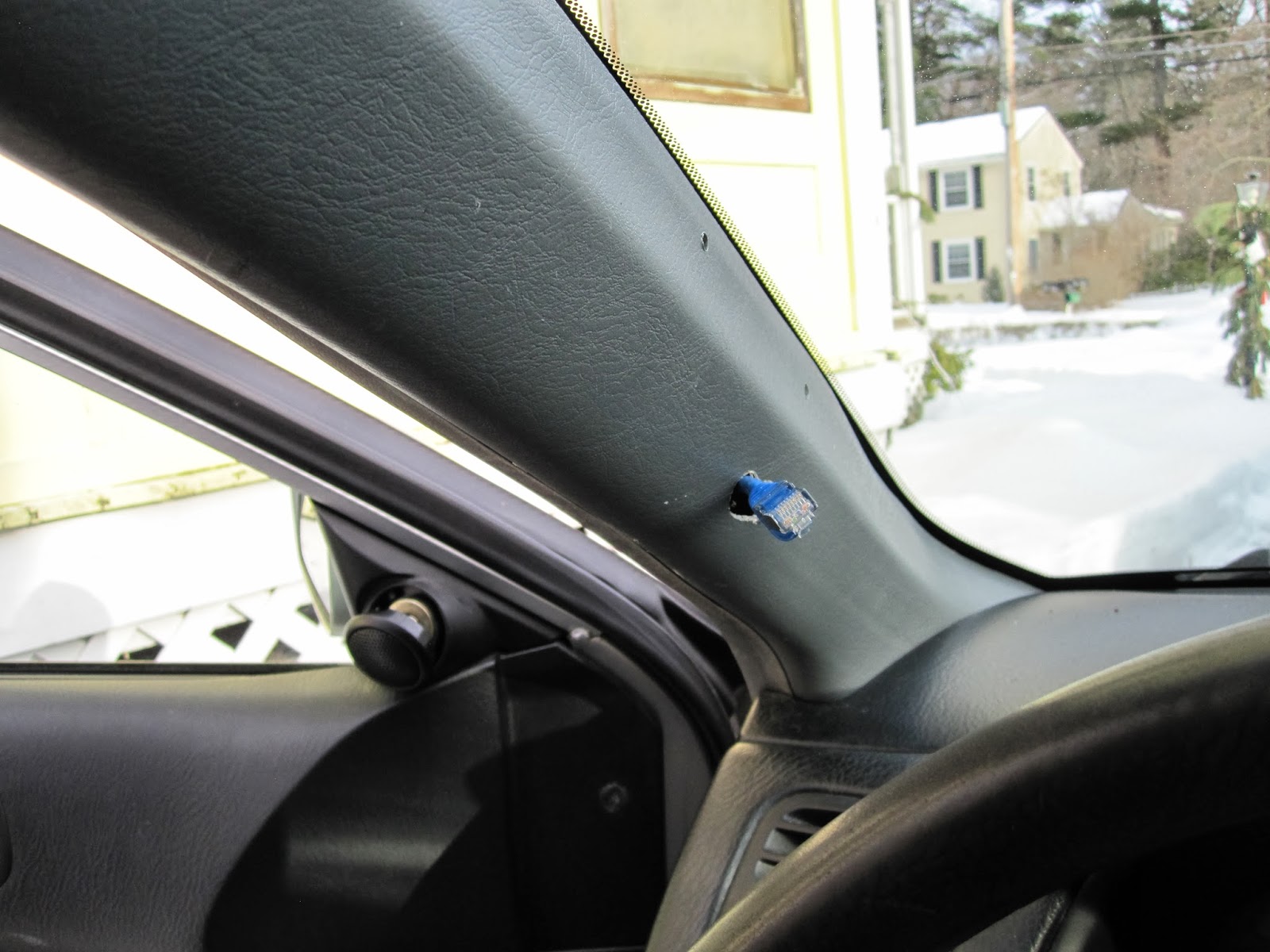 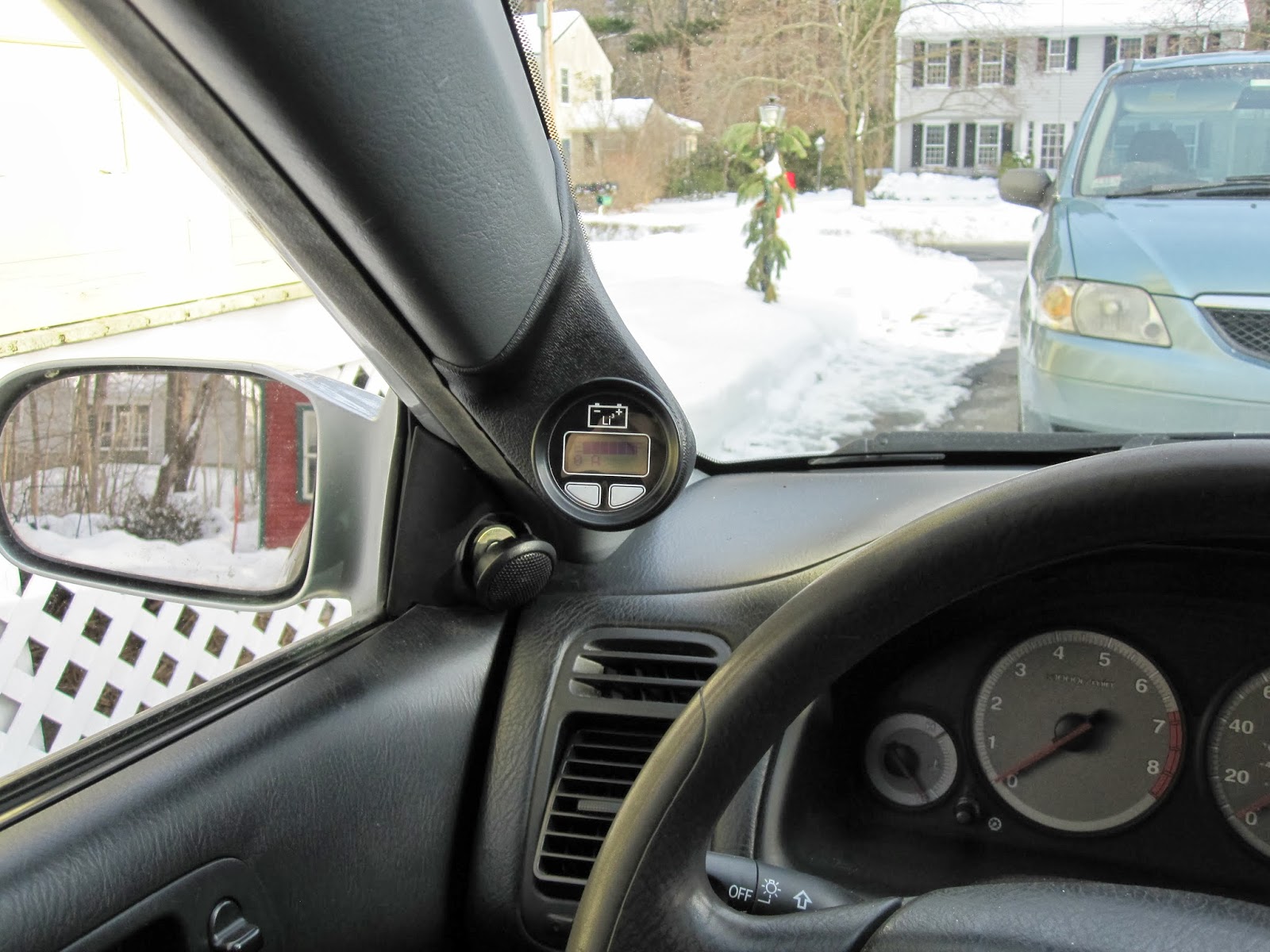 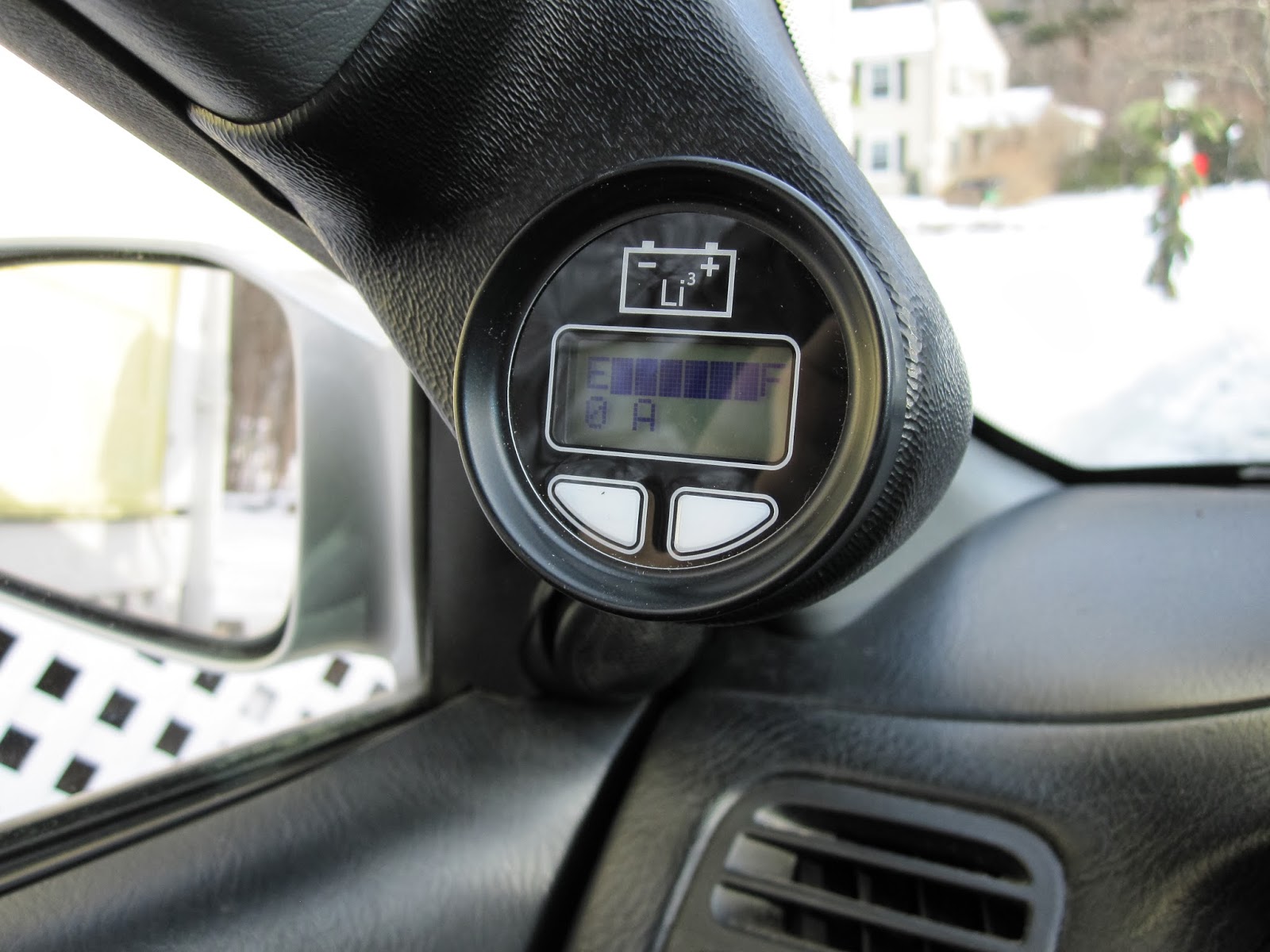 I purchased the EV Display this past fall and I have had it bouncing around the cup holders while I came up with a way of installing it into the dash board. A few weeks ago I decided that a Pillar Pod would be better and I'm glad I went that way. It took me a total of 30 minutes to pull off the pillar, drill the holes for the Pillar Pod, then run the Ethernet cable and mount it all back together.

Now I now longer have to look down to see my battery stats, which is really nice. Next of my list of things is installing the J1772 connector. I've been slowly working on the mount for it but with the weather being so awful I just haven't had the motivation, or a garage to work in.

I'm also working on some way of logging data while I drive. I've come to down to two ideas, rig up a Raspberry Pi to the EV Display and Zilla, or get an Android in-dash Nav System/Radio and write some logging apps for it.
Posted by David Harrington at 6:32 PM No comments:

It's been quite some time since I updated this blog. This past summer I installed the new EV Display to use as a battery gauge and it works great. The EV has well over 4500 miles on it now and last week we installed a newer, better rear suspension system. 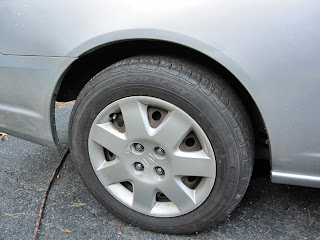 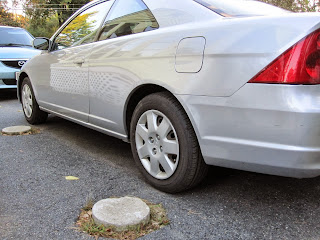 The Civic is back to stock ride height! I upgraded the rear springs from 450 lbs/inch to 1000 lbs/inch because the 450 lbs/inch sagged too much and caused the car to bottom out over some bumps. The car even feels better now that the rear is 3" higher than before.

I started a new job back in June and I haven't driven my EV to work yet, my dad has been using it since then. But now that I have upgraded the new springs and located a plug at work (that I need to test) I am planning on taking it to work soon.

I am also going to insulate the battery pack this weekend since the weather is getting colder. The cold weather performance of the lithiums are great, but they need to be above freezing to charge. Last winter I only charged during the day when the trunk was 45 F+ in the sun and on the really cold days I left the ceramic heater in the trunk. But this year I want to be able to charge at any time and the insulation will keep them above freezing. I might even put some small electric blankets around batteries for those nasty cold days.
Posted by David Harrington at 5:20 AM 4 comments: